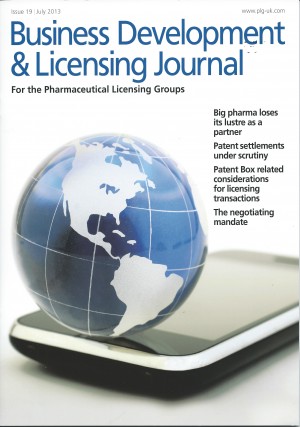 A round-up of forthcoming meetings around Europe.

The role of licensing agreements in the sharp decline in licensing deals among top ten pharmaceutical companies since 2009.

Competition authorities are increasingly focusing on payments that delay the introduction of generic medicines to market.

The UK government’s introduction of the Patent Box in April 2013 will benefit firms with qualifying IP rights or exclusive licences, creating significant savings. However, the process can be highly complex.

Negotiating mandates are often underestimated but should be a priority if a deal is to come to fruition in a smooth, successful manner.

Pharma has evolved to lengthen life expectancy, among many other societal benefits. But with developments in genomics, biology and tough regulation, what might the future hold for the industry?

With nine M&A deals announced, a look at an active and exciting month.

Trends are often borne out of circumstances when a style of behaviour is developed to suit the prevailing climate. Reflecting consumers’ reluctance to spend their way out of economic recession, most pharma companies appear reluctant to buy into new technologies where the perceived risk is high. Where early stage deals are cut, the structures are usually backloaded to manage the risk profile. Mergers and acquisitions however seem to offer a safe haven – buying up turnover and building a sound structure for when the good times return.

Looking at the deals that have closed over the first half of this year, acquisitions are definitely the dominating trend, providing an apparent growth strategy for larger companies and an escape route for smaller financially challenged businesses.

So what other key strategic trends have been observed? Some two years ago we ran the article An alternative future for the pharmaceutical industry, in which it was considered that the industry might be looking to adopt the tactic of de-merging to slim businesses down to improve flexibility and improve efficiency. Fast forward and this has come to pass with AbbieVie separating from Abbott in January and other companies, such as Pfizer, streamlining their asset base. In May, Pfizer spun out its majority holding in animal health into Zoetis, which follows its sale of the infant nutrition business to Nestlé in April 2012. The generics business is next for consideration.

Of course, this activity is not confined to the sales end of the industry; Open Innovation took over the mantle to supplement the cuts being made to in-house R&D.

One question is whether the industry will follow the traditional life cycle of growth (via technology), maturity (and consolidation) and decline (into commodity business). This broad, strategic thinking has been taken forward into the planning for the next IPLS meeting to be held in Dublin this September, where the subjects look at business development from all points of the product life cycle. It is a must-see event.