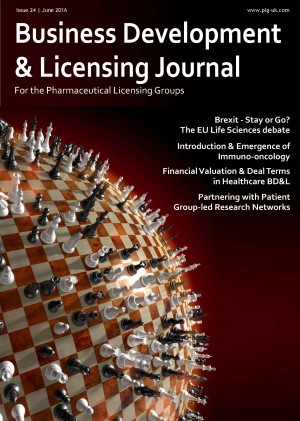 The EU and life science - behind the sound bites

The unprecendented volume of recent deals

Moving deeper into 2016, the UK is facing an interesng summer with the forthcoming referendum in June to decide whether the UK should remain part of the European Union or separate after some 43 years of partnership. Naturally there have been strong views expressed on both sides of the political spectrum focusing on what the economic position might be post Brexit. Certainly it would be an uncertain landscape with so many changes that would impact the industry in terms of IP and regulatory to say the least. So it is no surprise that this issue includes an article from Pinsent Masons reviewing some of the key aspects of the ongoing debate. Later in the year the US presidential election may also bring some surprises that result in significant economic consequences for the pharmaceucal industry.

Other articles in this issue include the feedback from the survey undertaken at the last IPLS conference in Berlin by Roger Davies and Klaus Maleck into financial deal terms. One of the results was the sales multiple that companies are prepared to pay to acquire products. This would be of interest to the delegates at the conference on Business Development and Innovaon Opportunies in Consumer Healthcare / OTC. In the PLG News we capture the most interesting features of the presentaons from Big Pharma and smaller OTC companies. At the other end of the pharmaceucal spectrum from OTC and one of the hottest therapy areas for deals is immuno-oncology and Chris Sheldon provides an overview.

It will be interesng to see if the political uncertainty during this year has any effect on the number of licensing and acquision deals.